As I mentioned in my 2018 year end review, I managed to make it through the entire year without acquiring any new games (classic, physical games; not counting Steam games here). Not for lack of trying, mind you. It’s just that a lot of my usual sources have dried up. I had a favorite local thrift store that I discovered in 2008, when I was still playing a lot of old games for this blog. I probably procured at least 150 games from that shop, if I were to estimate off the top of my head. In the last few years, they seemed to have fewer and fewer games, moving them around the large shop occasionally so I would have to go hunting. Then it closed entirely. So, R.I.P. to that thrift shop.

Further, I found an eBay shop that still somehow had loads of games that weren’t in MobyGames (entry 1, entry 2, and entry 3 describing the numerous interesting finds from these stores). I decided to check up on the store again late last year, and of course it was no more.

I finally have an acquisition breakthrough, though! A few weeks ago, I had a little time to kill at a comic shop. I hadn’t visited such a shop in a rather long time. As I was about to leave, I found a rack stuffed with classic comics, each costing a single US dollar. I picked up a stack of 24 comics. A sampling: 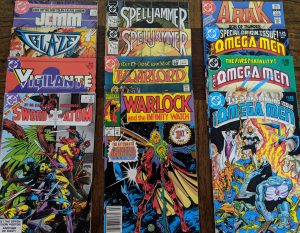 A pile of old comics (click for larger image)

Wait, what does this have to do with video game history? As of last October, MobyGames now accepts magazine advertisements. It wasn’t the front covers of the comics on this rack that caught my eye– it was the video game advertisements on the back covers. 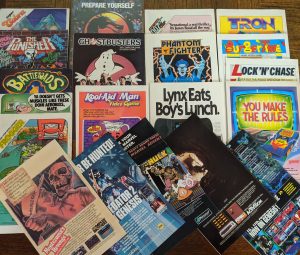 This is some good stuff. Did you know there was an interactive fiction (think Zork) game for The Incredible Hulk? There’s the ad for it. Some of these issues are real gold mines for old video games ads. In particular, I am finding a sweet spot in early 1990s comic book ads. Some of these comics will have 5-7 video game ads.

I definitely anticipate returning to the shop to scavenge more comics with unsubmitted advertising, especially now that I know what to look for.