I had so much fun with the last batch of comics that I decided to visit the same comic shop and raid their dollar comic rack again, especially since I now know what the look for. In particular, I was interested in comics from the 1990s, when video games really took off, and advertising thereof ramped up commensurately. This score wasn’t as dramatic with only 8 comics: 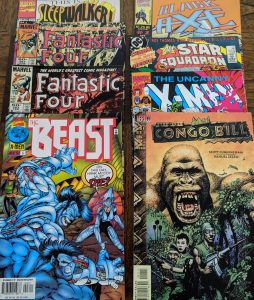 I was finding a lot of good stuff but noticed it was already in the database. These were the only issues I found with new material,

As of this writing, I have entered all of the scans into the database, all except 3. I have been putting these off since they are all double-page scans that require extra effort: 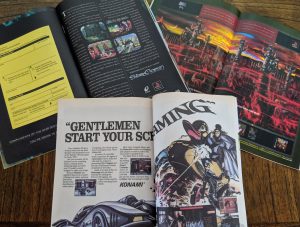 Two of them are from stapled comics so those should be rather simple to disassemble, scan piecemeal, and stitch together. The other has a glued spine, so I get to do that trick I’ve read about of heating up the spine with a hair dryer.

Note that one of the above ads (for Wild Arms) is actually a fold-in (apparently popularized by Mad Magazine). I’m thinking I may need to stitch together an example of the folded product and submit that separately.

I seem to have hit a point of diminishing returns pretty quickly on this front, at least with this particular comic shop. I may have to raid other comic shops in the area to see if any have similar deals on old comics.